But Williams has long had his eyes on Cox, the Eagles’ veteran defensive tackle who will be a handful for the Jets’ offensive line when they meet in the trenches at MetLife Stadium.

As Williams continues to establish himself as one of the better defensive tackles in the NFL in his third year with the Jets, bringing his name into discussions of the Pro Bowl and a potential contract extension, he’ll have a chance to share the field Sunday with Cox, the player after whom he has tried to model his game.

“Everything — I try to take everything from his game,” Williams said Friday after practice. “Because he’s big. I compare myself to him all the time. I laugh with coaches and players on the field that my comparison coming out of college was Aaron Donald. I’m like, ‘I cannot be Aaron Donald.’ Aaron Donald is first of all, 6-1, 285 pounds, quick as lightning, super get-off, amazing pass rush and all-around freak. I’m like, I compare myself to Fletcher Cox. Same height, same weight, probably the same power rushing. I grew up watching Fletcher Cox do the things he [does], trying to imitate the stuff he’s doing coming out of high school and college.”

Williams called the 30-year-old Cox a “mentor.” He got the chance to speak with Cox during the NFL draft process before the Jets selected Williams with the third-overall pick in 2019.

But the 6-foot-3, 303-pound Alabama product got an even better learning experience from the 6-4, 310-pound Cox this summer, when the Jets and Eagles held joint practices. 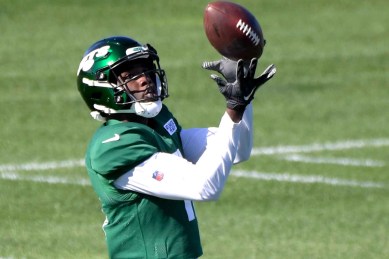 Flyers GM Fletcher: Injuries aside, ‘we need to play better’

Read Flyers GM Fletcher: Injuries aside, ‘we need to play better’ by YAHOO!News

Chuck Fletcher’s State of the Flyers: ‘Our best hope for a quick turnaround is by internal improvement’

Read Chuck Fletcher’s State of the Flyers: ‘Our best hope for a quick turnaround is by internal improvement’ by Philadelphia Inquirer on MSN.com

How much leash will Vigneault have from Fletcher?

Read How much leash will Vigneault have from Fletcher? by NBC Sports

Fletcher Toyota is helping with our Coat Drive